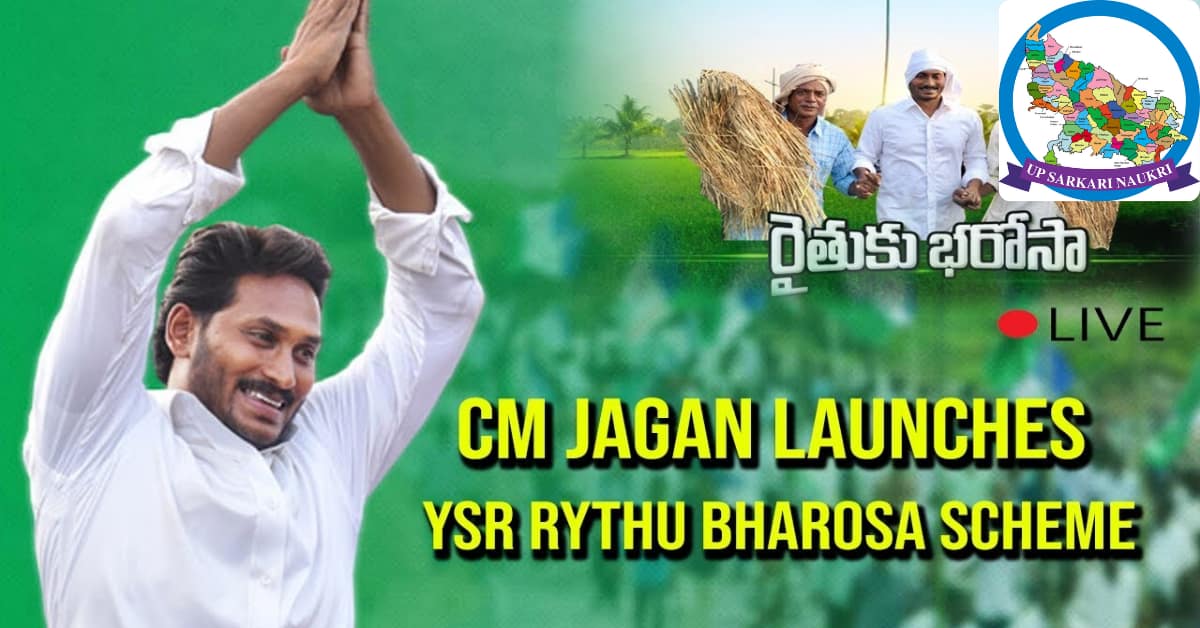 The YSR Rythu Bharosa Scheme was introduced by the Government of Andhra Pradesh to provide financial help to farmer families from scheduled castes, scheduled tribes, backward classes, minority landless tenant farmer families, and others. The government provides a financial aid of ₹13500 every farmer household under this scheme. On October 15, 2019, the Rythu Bharosa plan was started. This system also provides a variety of other benefits. The YSR Rythu Bharosa list 2022 is covered in detail in this article. This guide will walk you through the step-by-step process of registering for this programme. Aside from that, you’ll learn about the objectives, benefits, features, eligibility, required paperwork, and so on. So, if you want to take advantage of the YSR Rythu Bharosa plan or want to check the YSRRB payment status, you should read this page attentively.

Following the announcement of the YSR Rythu Bharosa programme, the government established the Rythu Bharosa Kendra to provide seedlings, fertilisers, and seeds. The scheme began on May 30, 2020.

YS Jagan Mohan Reddy, the chief minister of Andhra Pradesh, released the third tranche of investment aid under the YSR Rythu Bharosa Scheme on January 3, 2022. The scheme’s third trench has benefited approximately 5058489 people. For 5058489 recipients, the government has spent ₹1036 crore. This money was sent from the CM’s camp office in Tadepalli to the farmers’ bank accounts. In the fiscal year 2021-22, a total of ₹6899.67 crores will be deposited. This scheme has offered ₹19812.79 crores in investment assistance during the last three years.

On the 15th of October, 2019, this programme was started. In the first year, almost ₹6162.45 crore was distributed to ₹45 lakh farmer families. The Central Government, under PM Kisan, was responsible for ₹2525 crore, while the State Government was responsible for ₹3637.45 crore. The government of Andhra Pradesh has deposited ₹6750.67 crore into the accounts of ₹49.40 lakh farmer families in the second year. Under the PM Kisan Yojana, the state government has given ₹3784.67 crore while the central government has contributed ₹2966 crore.

Farmers would benefit from the YSR Rythu Bharosa scheme, which was designed to help them financially. The second tranche of the YSR Rythu Bharosa plan is scheduled to be disbursed on October 26, 2021. Aside from that, on October 26, 2021, the government will distribute a benefit amount under the YSR zero-interest loan and YSR yantra Seva schemes. The benefit amount will be deposited into the beneficiaries’ bank accounts. Under the three programmes listed above, a total of ₹2190 crore will be transferred. The Rythu Bharosa plan will help ₹50.37 lakh farmers, with everyone receiving ₹2502. Farmers have received a total of ₹18777 crores under this scheme so far.

The Chief Minister of the state of Andhra Pradesh has decided to credit the first instalment of Rythu Bharosa for the fiscal year 2021-22 during a cabinet meeting. On the 13th of May 2021, the government would spend ₹3900 crores on the first instalment, which will be put into the bank accounts of ₹52.34 lakh farmers. This initial instalment will provide each farmer with ₹7,500. The AP government will deposit the funds into the farmer’s account through the Direct Bank Transfer (DBT) procedure.

Now is the time to learn how to check the YSR Rythu Bharosa Payment Status for the year 2022.

You must carefully follow the following step-by-step steps to check YSR Rythu Bharosa Payment Status 2022. Check it out and follow it.

Note: After selecting Submit, you will get information about your previous instalment and the next (upcoming) instalment.

Approximately, ₹49 lakh families have received minimum support price under the YSR Rythu Bharosa-PM Kisan scheme as of today. The chief minister of Andhra Pradesh delivered financial relief to all qualified farmers on May 15, 2020. We meant to pay ₹7500, but due to the Coronavirus (COVID-19) pandemic, we have placed ₹2000 in the bank accounts of a renowned farmer in the month of April 2020, according to YSR Jagan Mohan Reddy. The remaining ₹5500 was deposited by the YSR government on Friday, May 15, 2020. The second and third sums, namely ₹4000 and ₹2000, will be released by the AP government in the months of October 2020 and January 2021, respectively.

The State Government will spend ₹6534 crore in the 2019-20 fiscal year to ensure the smooth implementation of the YSR Rythu Bahrosa Scheme. The government has spent ₹3675 crore in the first phase. The funds for all three phases will be transferred via direct bank transfer (DBT). As a result, the instalment amount will be deposited straight into each beneficiary’s bank account. There’s no need to be concerned.

Farmers would receive ₹5500/- in financial help for the purchasing of seeds, according to H Arun Kumar, Special Commissioner, Agriculture, in a statement released on Wednesday, April 22nd, 2020. Farmers from the SC/ST/Minority/BC categories would receive ₹7500 in their bank account. Farmers who cultivate endowments department grounds would also be eligible for ₹7500/-. The district administrations will present a list of eligible farmers in the gramme panchayat office. Seed distribution will begin on a subsidised basis through Rythu Bharosa Centres on May 15, 2020. Those whose names are missing from the list should contact the MEO (Mandal Extension Officer) by May 10.

How to check YSR RYTHU Bharosa?

The steps to check the AP YSR Rythu Bharosa Scheme Payment Status are outlined below. 1st step: Visit the official website of the YSR Rythu Bharosa AP government at https://ysrrythubharosa.ap.gov.in/RBApp/index.html. Step 2: On the home page, go to the main menu and select “Know Your Rythu Bharosa Status.”

How to register ysr rythu bharosa?

The process of registration is very long, you can check full process from the article, if you are on Google Click on the link given below.

You can check YSR Rythu bharosa list from the article given above, if you are on Google Click on the link given below.

How to Crack CDS Exam in First Attempt 2022