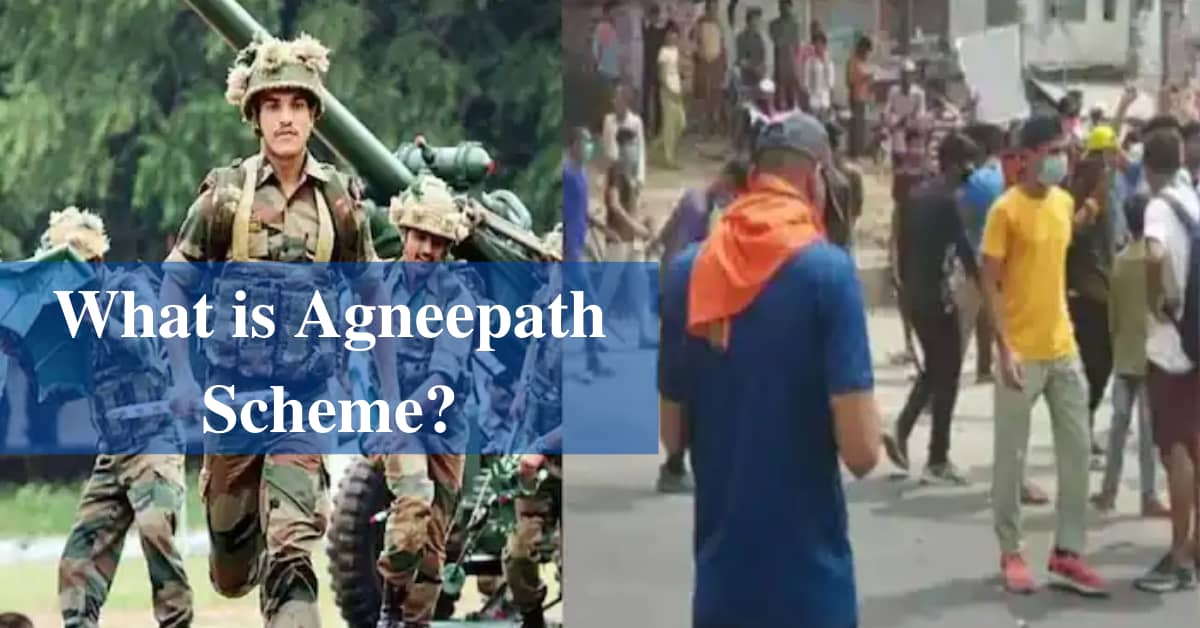 What is Agneepath Scheme? | Salary Age Qualification & More: On June 14, the country’s Defense Minister, Rajnath Singh, announced the commencement of a program called ‘Agneepath.’ Youth will be enlisted in the armed services for a four-year period. The young chosen under the initiative will be known as ‘Agniveer,’ and roughly 46,000 kids are expected to join the Sahastra troops this year. However, there has been widespread unhappiness with the central government’s declaration in many states across the country.

Check all Schemes Info in UP Sarkari Naukri

The resistance to the Agneepath system of enlisting young people to serve in the army as Agniveers for four years is growing. Thousands of army recruiting aspirants flocked to the streets across the state on Thursday to protest the program, marching in a parade and demonstrating vehemently. Check other info regarding What is Agneepath Scheme?

What is Agneepath Scheme?

This year, 46 thousand youngsters would be admitted into the Sahastra forces under the Centre’s Agneepath initiative. The kid will be recruited for four years and given the name ‘Agniveer’ under the plan. Agniveers will be between the ages of 17 and 21, with a monthly wage of ₹30,000/- – ₹40,000/-. According to the proposal, 25% of the recruited teenagers would be given more opportunities in the army, while the remaining 75% will be forced to abandon their jobs.

The Army’s regimental system will remain unchanged as a result of the Agneepath program. In the first year, three percent of the overall armed forces would be recruited as Agniveers. On Thursday, government officials revealed this information amid violent youth protests around the country against the new system.

According to this plan, the Armed Forces will recruit about three times as many soldiers as they do now. However, the specific time span is unknown at this moment. It’s worth noting that the government has begun a four-year contract recruiting plan for troops in the Army, Air Force, and Navy.

What is the Age Limit of the Agneepath Scheme?

This is considered to be a major change in the decades-old army recruitment system. Under this, the youth of 17 and a half to 21 years will be included in the three wings of the army. On completion of four years of service, 25 percent will be placed in regular service, while 3 out of 4 Agniveers will not be able to continue service. For them, the government is offering many other options for education, job, and business.

Regiments will get the best Agniveer: Sources said that doubts were being raised about the composition of many regiments with the Agneepath plan. There are recruits from certain areas or castes like Rajput, Jats, Sikhs etc. According to sources, there will be no impact on the regimental system from Agneepath. Rather, they will get the best Agniveers. This will further improve the cohesion of their units. According to army authorities, the ratio of Agniveers to army in the first year will not be unaccountable. After four years, the performance of the troops hired under this system will be evaluated, and they will be re-inducted into the army. In such a circumstance, the army will assess candidates for supervisory positions.

Concerns are also being expressed about the impact on the army due to the short tenure of Agniveers, but sources said that there is a similar testing system in many countries. On completion of four years, the performance of Agniveers will be re-tested and 25% will be placed in service. The new scheme will increase the ratio of young and experienced soldiers to 50-50% in the long run.

What is Agneepath Scheme 2023?

The scheme has been brought after 2 years of detailed discussion with serving military officers. Its proposal was prepared by the Department of Military Officers, who are military officers. Sources said that it is an insult to the values and traditions of the Indian Armed Forces to think that Agniveer can leave the army and become a threat to society. Read More From Twitter.

In cooperation with Defense authorities, the National Institute of Open Schooling (NIOS) will develop a specific program for awarding a 12th certificate to Agniveers who join Agneepath duty after passing the 10th grade. As a result, Agniveers will be able to enroll in custom-created courses that are relevant to their service area. This information was provided by Ministry of Education officials. This 12th-grade diploma will be valid not just for work but also for higher study throughout the country.

Will aid in the reduction of troop average age from 32 to 25 years: Brahm Chelan

Brahm Chelani, a security expert, welcomed the Agneepath plan, saying it would help reduce the average age of Army troops from 32 to 25 years. Every reform in India’s raucous democracy is met with opposition. Aside from that, even the finest of the best will be given the opportunity to join the army on a permanent basis. The rest might join the police force or other government agencies. The new recruiting standards will also aid in the Indian Army’s core changes.

Government’s Side of the Plan

Defense Minister Rajnath Singh has described the Agneepath scheme as a very positive initiative. He said that this would give an opportunity to the youth to join the army. This will strengthen the security of the country and it has been brought to give military service opportunities to the youth. This will also increase employment opportunities in the country. Apart from this, the experience gained while in the army will also help in getting jobs in various fields.

Why is youth protesting?

Youth are protesting against this scheme in many states of the country. Bihar has witnessed the maximum number of protests. The side of the youth preparing to join the army is that they work hard for many years and prepare to join the army. In such a situation, they do not accept a job for four years. The protesting students have appealed to the government to immediately withdraw from this scheme.

The salary structure of Agneepath Warriors is shown in the given below image, you can check the salary and other information down below regarding Agneepath Scheme.

Lt Gen Amardeep Singh, the General Officer Commanding-in-Chief of the South Western Command, has praised the Bhinder Agneepath project as a significant opportunity for the young. According to IANS, he stated that the army will give individuals skills based on their merit and ability. After four years, 25% of the candidates will be accepted into the army based on their merit. Simultaneously, the remaining 75% of those who will return to society will be granted skill certifications, allowing them to apply for government or private employment depending on their abilities.

There are many misconceptions about the future of Agniveers and the Agneepath scheme, which government sources have denied and released the facts.

Is the future of Agniveers insecure?

(1) It will happen in the future.
(2) Young entrepreneurs who are willing to become entrepreneurs will get financial packages and bank loans.
(3) Those who are willing to study further, will be given a certificate equivalent to 12th and a bridge course will be conducted.
(4) Those who want to do jobs, will get priority in Central Armed Security Forces and State Police.
(5) Many other sectors will also be opened for these Agniveers.

Will Agneepath reduce opportunities for youth?

Opportunities for youth to join the armed forces will increase. The number of Agniveers in the Armed Forces today will be three times this.

Will regimental allegiance be affected?

The government is not making any changes in the regimental system. Rather, this system will be strengthened because the best Agniveers will come here, this will improve the harmony even more.

Will this hurt the efficiency of the Armed Forces?

Most countries have short-duration military recruitment systems, which is considered good for the young and agile army. Agniveers recruited in the first year will be 3% of the total Armed Forces force. After checking his performance, he will be re-inducted into the army after four years. In this way, the army will get tested soldiers at the senior rank.

Is there a threat to the army, can you meet terrorists?

To think so is an insult to the values and prestige of the army. The youth who will wear army uniform for 4 years, will be devoted to the country. Thousands of soldiers retire, but no such case has come to the fore in which they have mixed with anti-national forces.