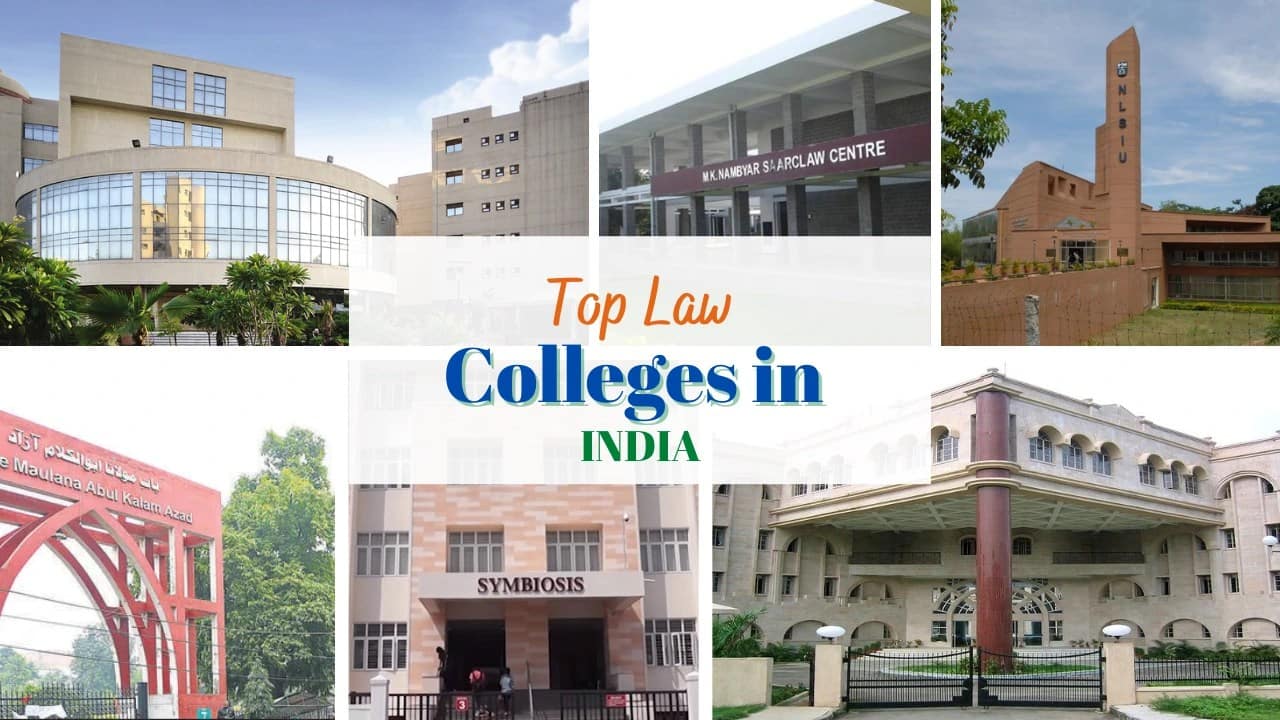 Top Law Colleges in India: Are you one of the applicants looking for the Top Law Schools in India according to the NIRF Rankings? So if you want to learn more about the NIRF Law Ranking 2022, check out this link. On the Top 30 Law Colleges in India, the National Institutional Ranking Framework (NIRF) Ranking has released a statement (NIRF 2022 Rankings). On July 15, 2022, HRD Minister Shri Dharmendra Pradhan released the NIRF Law Ranking 2022. Teaching, learning, and resources, research, professional practise, graduation results, outreach and diversity, and perception are the ranking criteria.

In 2022, National Law School of India University, Bengaluru, along with National Law University, New Delhi, which is once again ranked second, secured the top spot among all law schools in India. Another school that has improved its ranking is Symbiosis Law School, which this year rose from ninth to third with a score of 73.73. The Nalsar University of Law, Hyderabad has dropped one position from the NIRF Ranking from the previous year, and is now ranked fourth among the top law schools in India. Please read this article to learn more about the Top 30 Law Colleges in India for 2022 and the National Institutional Ranking Framework (NIRF) 2022.

Nalsar University of Law, Hyderabad is ranked in the Top 4 in the NIRF Ranking 2022. Among the top 10 Law universities, the West Bengal National University of Juridical Sciences in Kolkata dropped from fourth to fifth place this year, followed by the Indian Institute of Technology in Kharagpur, which fell from fifth to sixth. The Symbiosis Law School in Pune has moved up from ninth to third place. Now look at the table below to gain a quick overview of the NIRF Law Rankings 2022.

Bangalore’s National Law School of India University (NLSIU) was founded in 1986. It is a public law school that is frequently recognised as India’s top legal education facility. BCI acknowledges it. Currently, NLSIU Bangalore offers BA LLB at the undergraduate level, and LLM, MPP, MBL, and PG Diploma at the graduate level.

One of the renowned national law schools established by the Bar Council of India to provide the five-year law degree in India is National Law University (NLU), Delhi (BCI). NLU Delhi is ranked second for law schools by NIRF in 2022. Every year, more than 100 students are given access to NLU Delhi courses at the undergraduate and graduate levels with the help of an outstanding and knowledgeable faculty who can offer advice and motivation. All India Law Entrance Test (AILET), which NLU Delhi administers in place of CLAT, is used to determine admission to undergraduate and graduate programmes. However, the University’s PhD entrance exam is also used to determine admittance to the PhD programme.

The NLU Delhi urban campus currently has a two-story library, computer centre, auditorium with cutting-edge technology, four seminar rooms, hostels for both sexes, a medical facility, an ambulance, a sports facility, a bank, a canteen, a mess, digital classrooms, an E moot court hall, etc. Additionally, NLU Delhi offers numerous scholarships to worthy and needy students to help them pursue their education and jobs without financial limitations. Additionally, NLU Delhi Placements has a solid track record with placements, offering a typical remuneration package of 7 LPA. Some of the recent overseas recruiters to join the placement programme include firms like Linklaters and Herbert Smith Freehills.

Symbiosis Law School (SLS), a private college in Pune, was founded in 1977, is associated with Symbiosis International University, and has received approval from the UGC and the Bar Council of India. IIRF has recognised SLS as the top private college in India. The college offers numerous law-related undergraduate, graduate, diploma, and research programmes in a number of different areas.

The SET entrance exam is administered by the college, and admission to the SLS is based on merit. In order to give students job chances, the college maintains a well-equipped Career & Professional Development Cell that operates around the clock. ACC Cement, Bajaj Allianz, Bharti Airtel, Coca-Cola, Cipla, HDFC Ergo, Indiabulls, ONGC, Manupatra, IFL Mumbai, JSW Steel, ICICI Bank, Ernest & Young, and many others are among the top employers that hire.

An independent, publicly financed top university for legal studies is the National Academy of Legal Studies and Research (NALSAR) University of Law in Hyderabad. The Shamirpet, Hyderabad, Telangana-based Institute of Legal Studies provides law programmes at the undergraduate, graduate, and doctoral levels. Additionally, the university offers postgraduate business administration programmes. A applicant must achieve a certain score on the CLAT, CAT, CMAT, XAT, or GMAT in order to be considered for admission at NALSAR.

The Bar Council of India and the West Bengali government collaborated to form NUJS in 1999. It is an independent legal school that offers both undergraduate and graduate-level courses. It is situated in Kolkata, a city of salt lakes. It is regarded as one of the top national elite law schools. The university provides undergraduate students with a five-year Integrated B.A./B.Sc. LLB(Hons.) degree programme and postgraduate students with a master of laws.

The Jamia Millia Islamia Faculty of Law is located in Delhi, the Indian capital. The company was founded in 1989. Candidates can enrol in BA LLB, LLM, and PG Diploma programmes at the Faculty of Law. Additionally, the institute offers a Ph.D./M.Phil. (Law) degree. Passing the 10+2 exam with at least a 50% grade is required for admission to the BA LLB programme. JMI BA LLB is used as the basis for admission to the BA LLB programme.
Candidates must earn a minimum of 50% in their LLB programme in order to be admitted to the LLM programme. Any bachelor’s degree with a minimum grade point average of 50% qualifies a student for the postgraduate diploma programme.

In 2003, the Gujarat National Law University (GNLU) was founded. It is one of the most esteemed legal schools in the state and is situated in Gandhinagar, the capital of Gujarat. In 2003, the Gujarat National Law University Act officially recognised the university. The institution provides a variety of undergraduate, graduate, and doctoral programmes in the areas of law, management, and the arts.

According to the NIRF India Rankings 2022, Siksha ‘O’ Anusandhan University (SOA), Bhubaneswar, came in at number 30 nationally and topped the state rankings. Engineering, pharmacy, management, and other fields are among the subjects that SOA provides in its undergraduate, graduate, and doctoral programmes. Siksha ‘O’ Anusandhan accepts students based on their performance in national and university admission exams. Candidates may submit applications online, While participating in the Day Zero dream campus campaign with reputable organisations, almost 30% of these students obtained job offers in addition to their academic work, with Amazon providing the biggest package of INR 30 LPA and the students’ average yearly pay being INR 6.3 LPA. Microsoft, Amazon, Finastra, Robert Bosch, Dell, PWC, Kloudgin, Deloitte, HP Inc, Temenos, Informatica, MAQ Software, NPCI, Salesforce, and Rapyuta Robotics are just a few of the companies that have hired these students.

State-run National Law University (NLU), Jodhpur, was founded in 1999. It is located in the Indian state of Rajasthan. NIRF 2022 has ranked it 10th out of India’s 30 law schools. It offers programmes at the undergraduate, graduate, and doctoral levels, including BA LLB, BBA LLB, LLM, MBA, and PhD/LLD. Jodhpur NLU The CLAT and CAT/MAT/CMAT scores are used to determine admission to the integrated and graduate programmes. Admission to doctoral programmes is based on performance on university entrance exams. Examine the NLU Jodhpur fees.

Which Indian law schools are among the top ten?

The Top 10 Law Colleges in India are listed here according to the NIRF Ranking 2022: